nice work Rob! I was thinking the snow on Unc. and Mt. Ag. must be good right now.

It looks like the state or someone else took down all the little wooden "Guido" signs. It's too bad, it must have taken a lot of effort by someone to make them.
Last edited by North249 on Tue Dec 10, 2019 2:16 pm, edited 1 time in total.
Top

The main portion of the Guido was logged about 7 years or so ago. A local(not me) saved the signs just before operations commenced. They were replaced a year or so ago and were still up as of last week. I think they were placed a bit higher on the trees, so they may not be as obvious. The original sign in tube and box are long gone.
Top

Today I got onto Mt. Temple via the Wapack from the Sharon end. Nicely deep snow.
Top

Friday evening kick and glide around a neighbor's field.

Have no idea who put this here. When Cooper saw it her ears went up and she ran over and realized it was inanimate in half a second. Ruby, the smart one, not so fast. At least 3 minutes of tip-toeing and sniffing around.

Went out into the WMNF yesterday evening, the last day of rifle season in NH.
SuperDog, able to leap tall fences in a single bound, stoically surveys the road to the trailhead.

We've had a really dry autumn so the stream beds are perfect for deep snow accumulation that will eventually lead to navigable skiways. Today's rain will set that process back a little, but probably not too much. 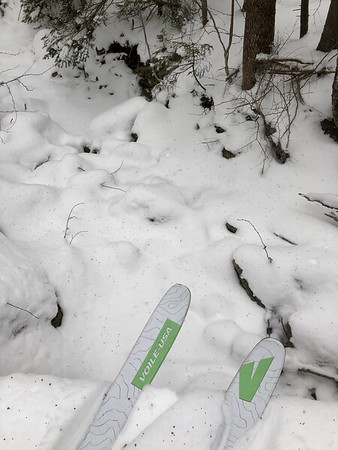 First minimal turns through logging slash that has taken many hours to clear.

Later on in the season it will take something stupid to get hurt (like trying to avoid a dog and crashing into a tree), but this early even trivial terrain can mess you up. Just squeaked through the trees and around the rocks here.

This admittedly lame logging road produced the first hoots of the season, semi-plush turns! Last year this area was rendered unskiable due to skidder and log truck traffic. Really happy to have it back. 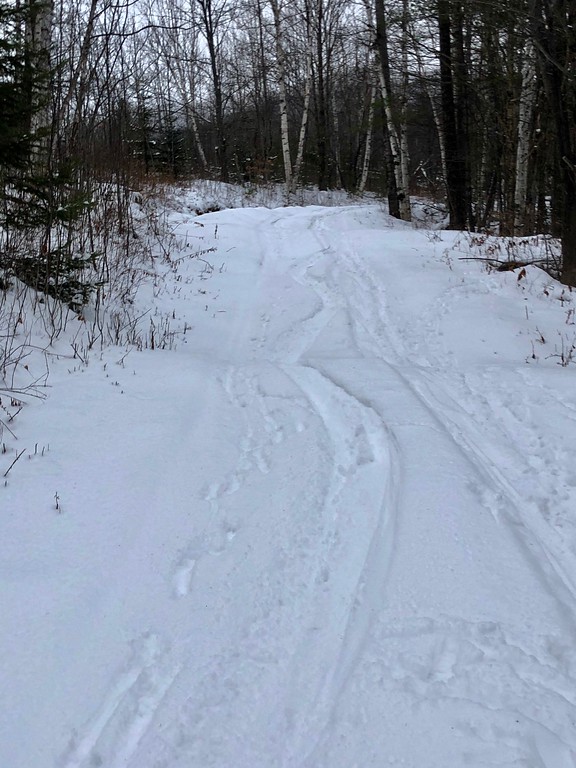 >>The main portion of the Guido was logged about 7 years or so ago. A local(not me) saved the signs just before operations commenced. They were replaced a year or so ago and were still up as of last week. I think they were placed a bit higher on the trees, so they may not be as obvious. The original sign in tube and box are long gone.

thanks!!! I'm happy to hear that. The last time I walked the trail, all the little signs were gone but 1, glad to hear somebody saved them. I've hiked that place many times but never with enough snow to ski. It looked like there were a few different ski lines off the top being maintained by somebody.
Top

Nope there is absolutely no skiing whatsoever there.
Top

So you know those semi-plush turns I was raving about? A week and two rain storms later that stretch looks like...

And you know that dry stream bed where the anticipated rain wouldn't set back the ability to accumulate snow too much?

Ruby sings CSNY's Love the Cover You Got.

Why are these back?! Am going to email the forest manager. Thought this section of the log lease was harvested and done.

Well hello everybody. Between one thing and another, I haven't been back to this site since Bob created it. The BC is pretty non-existent right about now, so I've been making do with lift-served and very small loops at touring centers. Two weeks ago we got a decent little storm, and skinning under the Wilderness chair at Bolton yielded some nice low-angle turns.

Sweet pic, Dirk. Real turns! Good to hear from you.

You may not believe this, but the Bufferfield loop rocked last night. Highly recommended. A little chopped up from snow machines near the parking lot and first downhill, but proceeding clockwise, it gets better as you go. The limited cover is packed pretty well from the machines.

May upshift from 3 pins to NNN-BC and do it again soon. 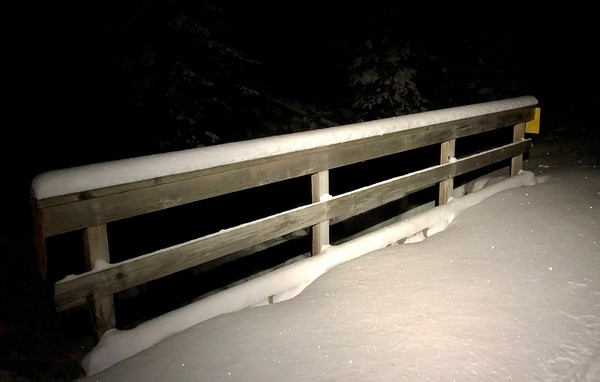 Gorgeous stars last night. Super crisp. Should really point an actual camera at the sky (instead of a phone) and try to capture a good photo.

Bonus tour feature: P & H truck stop is open 24/365 and has a damn fine homebaked snack collection. Their grill is open 6am to 10pm and the perfect version of this tour would have ended with blueberry pancakes and scrambled eggs, but the dogs were in the car and it was pretty cold out.

Nice Bob! That loop is some of the most reliable snow in Orange County. And everyone loves the P & H truck stop.
Top
Post Reply
63 posts