Orange County VT. Home of the Valencia and the Hamlin.

Did you know? The Orange tree is an evergreen! True!

Oh yes, skiing. Or at least pictures of dogs. 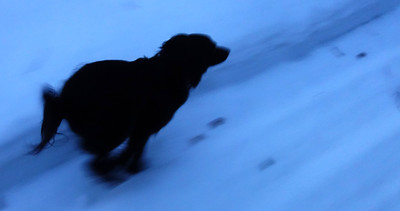 Braved a hike over an iced-up forest road to get up to this VAST trail which I'm looking forward to skiing more this season.

Nearby there are open fields. Except for the ridiculous, icy hike in/out right now, it's a nice spot.

Yesterday's fun. First stop, over in NH, where I arrived pole-less, dammit, due to having too many commas in a sentence and skiing the RR tracks the night before and forgetting to put the POLES IN THE TRUCK WHERE THEY BELONG, BOB.

Took a very brief pole-less tour to allow the dogs to burn off some steam, snapped this photo, and returned home for doggie dinner. 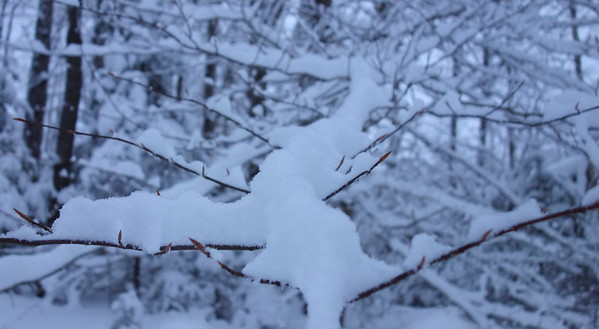 Take off again at 7:30p closer to home, in the orange district. Poles most definitely in the kit. Decide to get my money's worth and climb a ridge that wouldn't be broken out, but LO and BEHOLD, snow-machiners have actually gone at least part of the way up! Nice. Get half a mile in and encounter the two machiners coming back out who stop. Snow puking down. Night. Machines idling. Cooper barking. Guy dismounts, takes goggles off, approaches me. I'm standing off trail surrounded by dogs, skis on with headlamp. He asks, "are you ok?". "Hell yeah! Thanks for breaking trail!" "OK. Just making sure you're not lost." "Hell no! Going to bang a right (pointing) up there and then climb the spine of this ridge." He replies, "My old man owns all this. Great night to be out!" I respond, "Uh oh, is it OK to be skiing here?" "Hell yeah!" Offer him a handshake which he heartily returns and introduce myself. DUDE, just secured skiing rights in an area full of no trespassing signs that I've been ignoring for years! 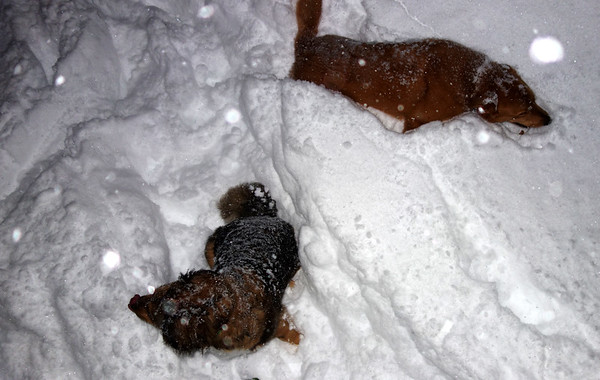 Dogs and I then break trail through over a foot of fresh up to the top where, happily, some snow machiners have been so I can actually go downhill without poling. We encountered tracks of something that had been bounding along in the snow. Prints and body impressions 6-8' apart. Prints were filled with half an inch of snow so I couldn't get a good look. I've consulted my handy "Familiar Animal Tracks of North America" guide and so far have ruled out Armadillo and Bison.