After a pleasant morning skiing groomers, I went out to one of my favorite spots, Kettle Pond in Groton. From a capacity crowd to complete solitude, it is, as your young stoner likes to say, all good.

Even the touring center can have a backcountry feel, if you beat the groomer to it. Upper Bobcat at Trapp's this morning.

An early Wednesday dash to the hill got me third tracks on the Gulf of Slides Ski Trail. The first two sets were by a gent who went to just before the Fingers slide path crossing for a lap down to the dip just above the Alternate skintrack and back up for another go. I went just above the upper cache into the exits of Main Gully.

I had thought to dig a pit partway up Main. When my edge cracked a wind-buffed section just 40 yards past the upper cache, I turned tail immediately and bolted back to the cache to gear up for the descent.

Lovely dense snow. I used my hinged knee brace for the descent, it helped a lot!

There was an avalanche in Main Gully in the early afternoon, about 90 minutes after I descended.
Top

I happened to be working the last couple of days at the house that accompanies this field. 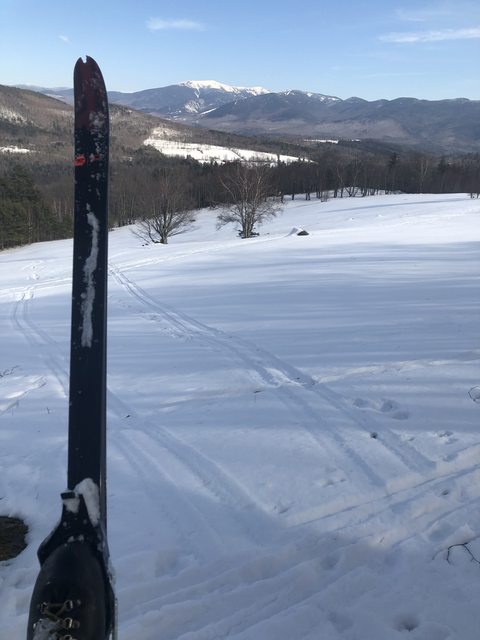 You probably recognize it as it's my go to meadow skipping arena. Tried out my new pair of Rossi BC 80s. Got in some kick and glide through the forest trails and made some reasonable turns too. It was too gorgeous on Monday to pass up a short jaunt, but man was it thick. 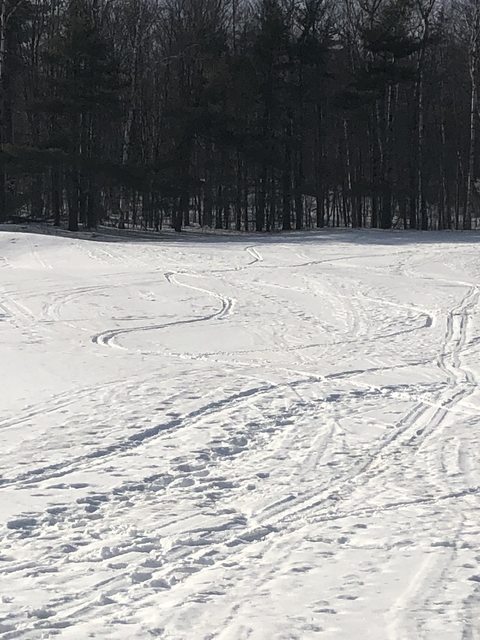 The field seems to be getting more use this year. Don't know if it might be because Cooley-Jericho is in the neighborhood? 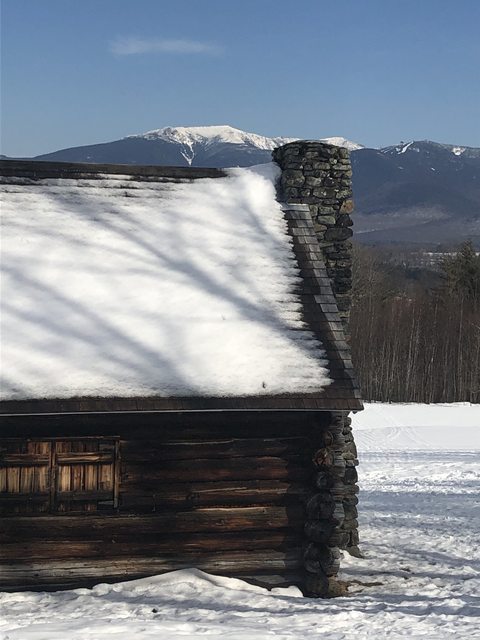 Poor birds will have to renovate this spring. 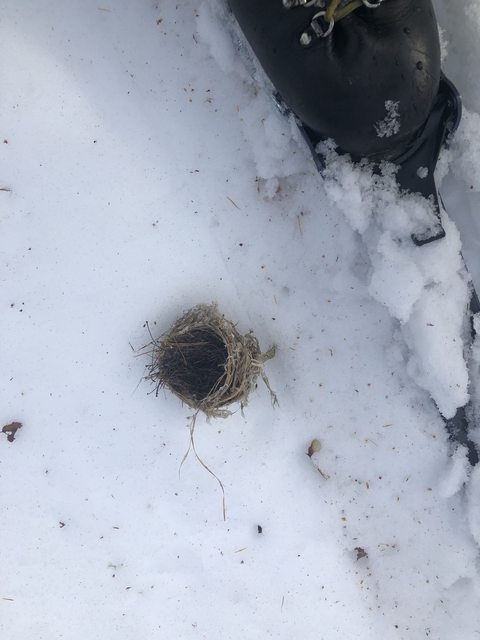 Fingers crossed for this next system!
Top

It's been a year since I was able to let'em run and feel like I was within my comfort zone. The GOSST pitches flowed together at a nice pace. The Sherby was not as much fun, although skiing it around midday was pretty good anyway.

My reasonable start netted first tracks on the GOS Ski Trail. I still cannot believe nobody caught me on the uptrack. I stayed with my plan of not crossing the Fingers Slide path if it had not flushed. No debris showed, so I headed down then switched to skinning the Graham Link to the Sherby. The Southern half of the GL is wide open, the Northern half is a tad bushy. The Bog near the BST shows some wet soil spots but is easily passable.

Once I got to it, I went down the Sherby to the high crosover and then up the TRT. The plan wazs to take a look at the Little Headwall, but, on a whim, I followed a skin track towards Hillman's. It was the snow science crew's tracks. I stopped just below where they were digging a pit and skied down. 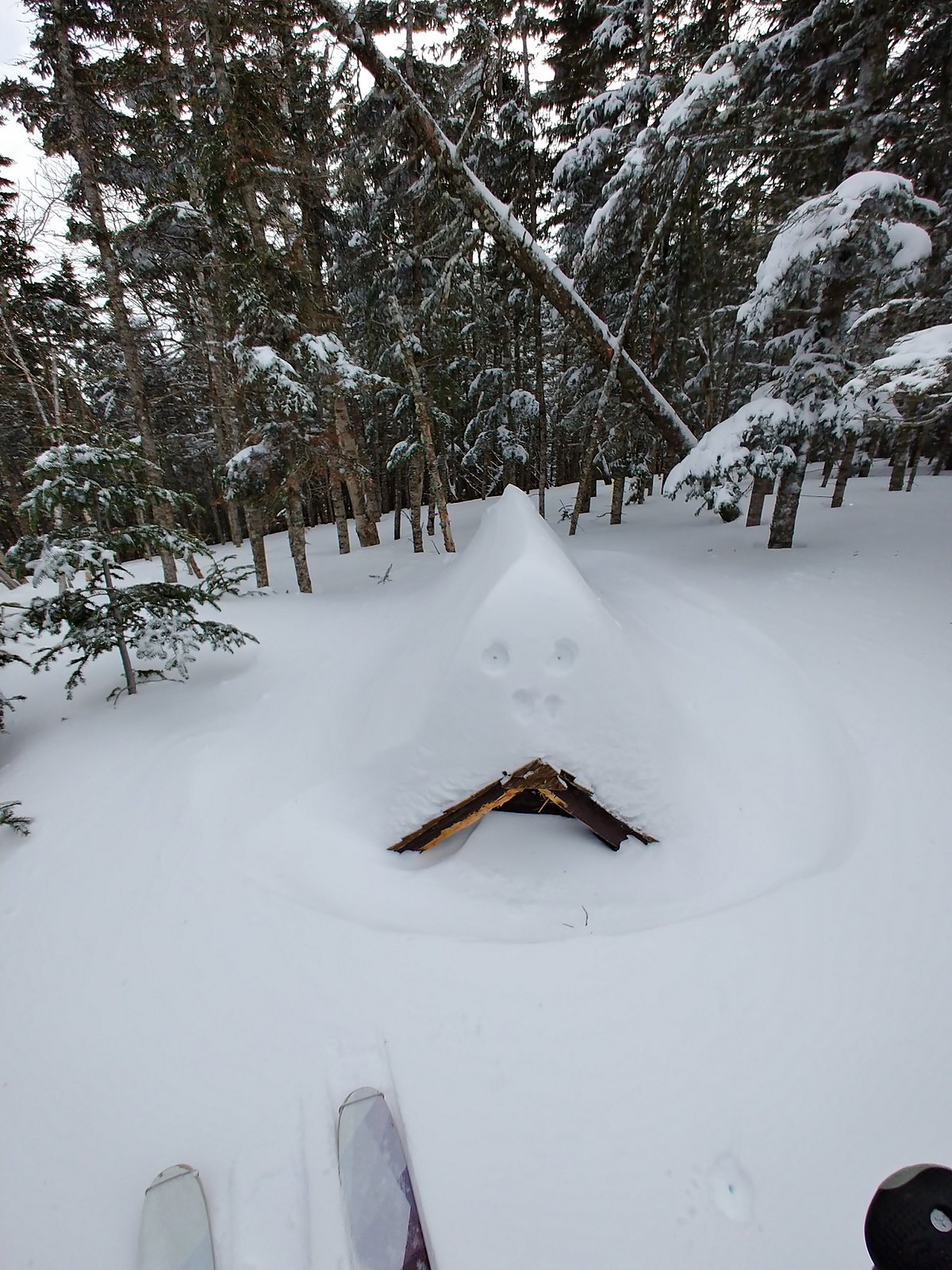 Sun and cloud over Boott Spur 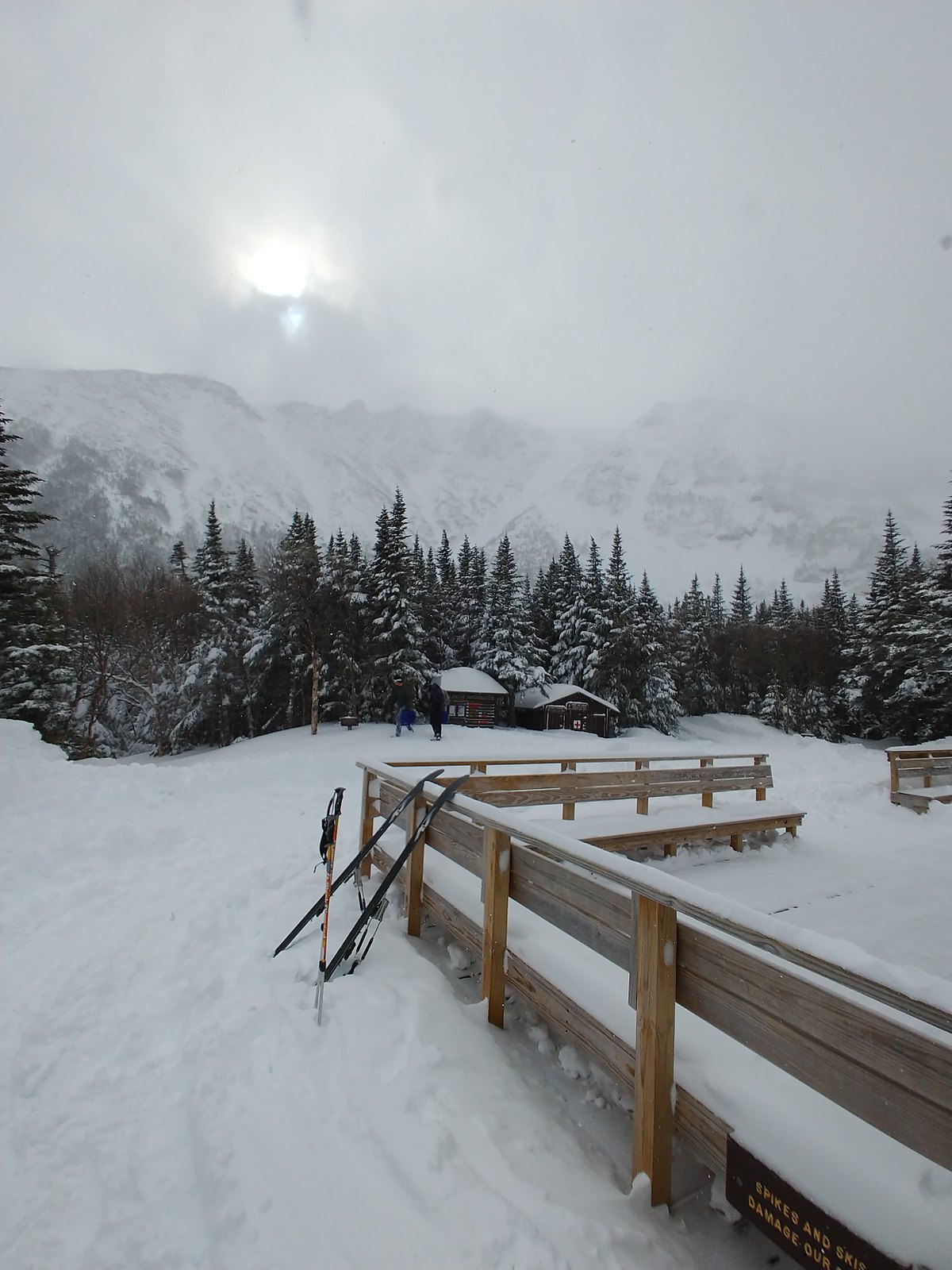 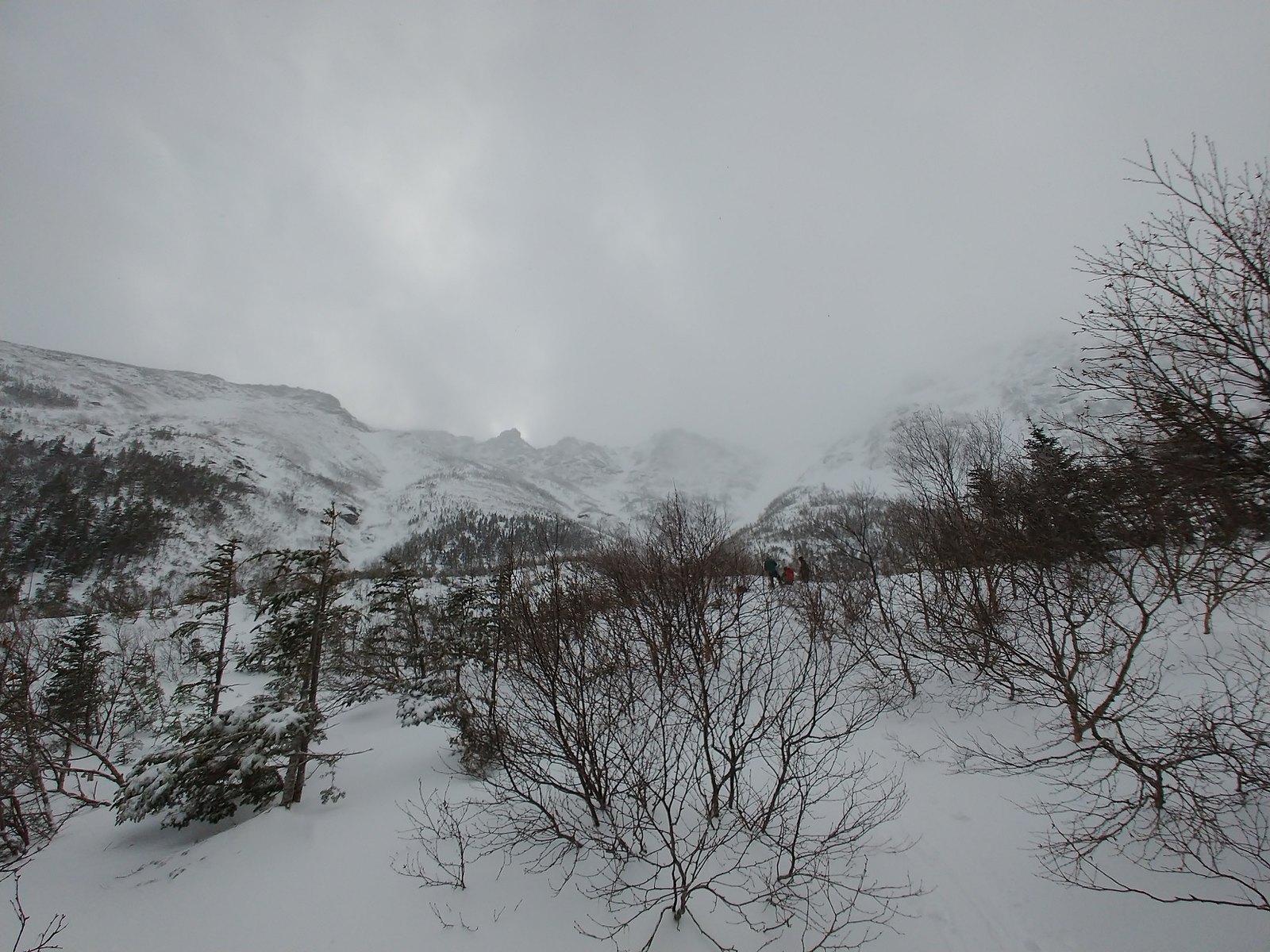 Sounds like a nice tour Rob. It may be bugs on my end but your photos are just blue question marks.

Son the Younger and I went up to the Crescent Ridge glades yesterday since the snow storm was a bust here but I had heard they got decent snow in Randolph. We were pleasantly surprise at the snow banks on the road in. 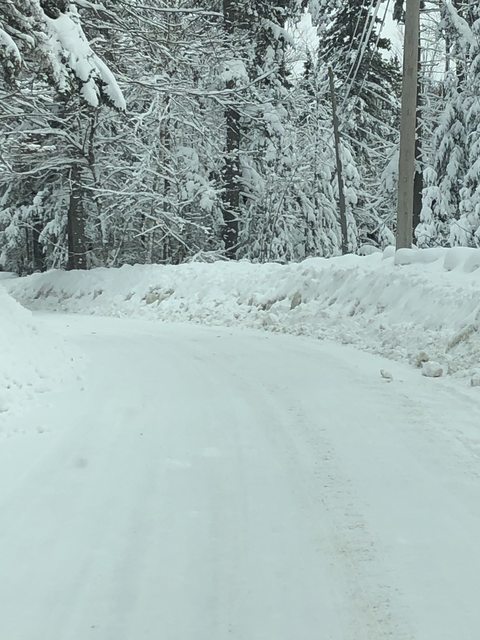 It was a beautiful day if a little windy. Just saw a glimpse of King Ravine as we drove in. But snow moved in and out all day long, supposedly lake effect from Ontario

Lower skin track. We weren't the first people in but among the first half dozen. 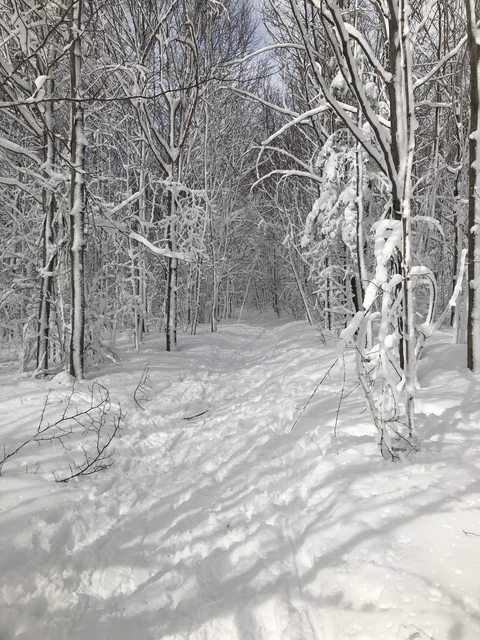 It was our first time in that zone so I was a little glad we weren't breaking trail. 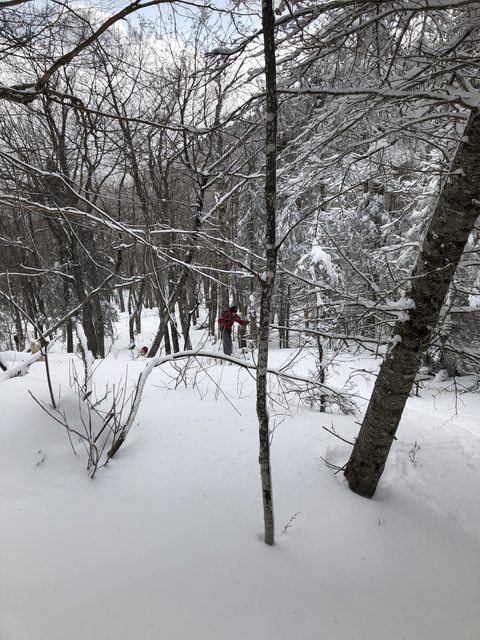 We got pretty close to fresh tracks as there are four lines to ski and went back up for another go.
We had too much fun on the first run to stop for photos. Second run we tried to find what we thought was the furthest glade out, thought we found it and had lunch at the top. 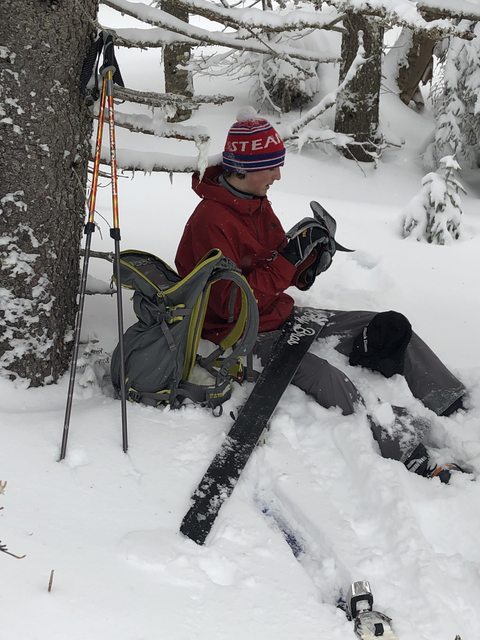 Turns out the glade we dropped into, though gorgeous for 100 yards, was not a glade and was choked out. We ended up bushwhacking for half an hour back to the glades. 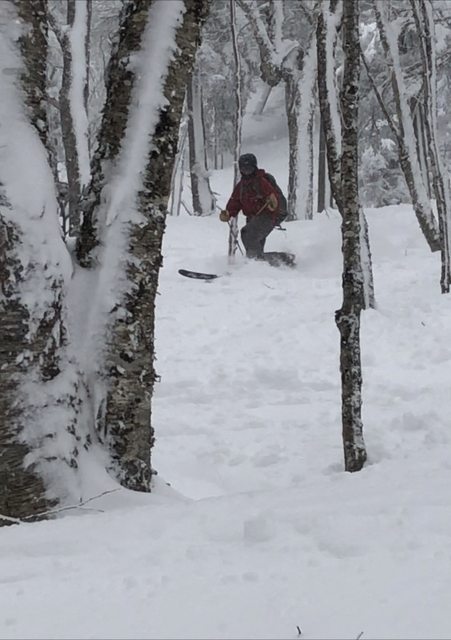 We decided to call it because we needed to get back for a prior commitment. There was a steady stream of people in there but the zone was able to support the traffic. I would definitely go back.

Son the Younger showing his old man how its done. 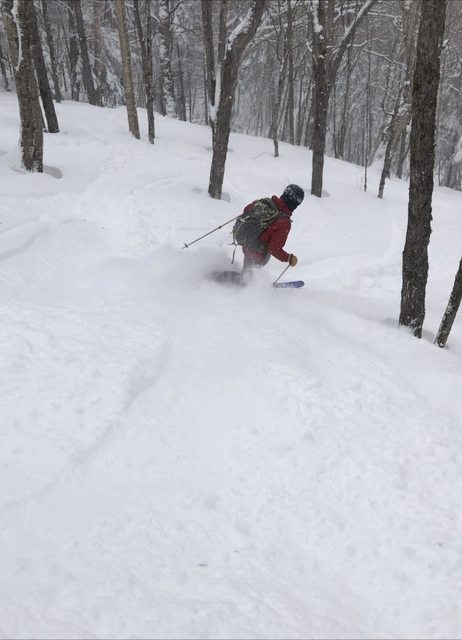 Double Barrel and Monroe Brook are calling me. Anybody interested in a wekday, westside wander?
Top

I’d love to rob but scheduling won’t allow it this week.

Love the photos though!
Top

The winds are playing hell with my plan, Thursday the 12th is looking good though. Only breezy and 4 days of 1-3 inches could make for fine conditions...and very likely, the need for fresh assessments along the way.
Top

What a difference a week makes.